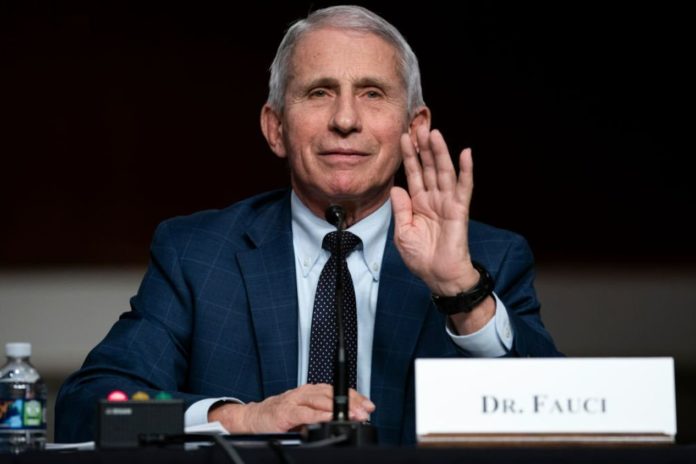 When CNN asked Dr. Anthony Fauci why the Biden administration tweeted that COVID vaccines had been given to everyone in the US, he smirked, laughed, and said he “can’t explain”.

When CNN host Jake Tapper approached him about the misleading tweet on Friday, he remarked, “I just can’t explain it.”

Fauci went on to say that he had no involvement in the tweet’s production and that he could not be held liable for every social media post made by the White House, for which he works as COVID czar.

The offending missive claimed, “When President Biden took office, millions were unemployed, and there was no vaccine available.”

“In the last 15 months, the economy has created 8.3M jobs and the unemployment rate stands at 3.6% – the fastest decline in unemployment to start a President’s new term ever recorded,” read a tweet sent out on Thursday afternoon.

The claim is false. When former President Donald Trump was still residing at 1600 Pennsylvania Avenue in December 2020, the first Covid-19 immunization took place in the United States.

The first Covid-19 vaccine to be licensed by US regulators was the Pfizer / BioNTech vaccine, a cooperation between a US pharmaceutical firm and a German biotechnology company.

Dr. Fauci could only laugh when questioned on Friday and was unable to provide an explanation.

“When president Biden took office, millions were unemployed and there was no vaccine available and it goes on from there but as you know it’s not true. It might not have been widely available, but it was available, ”CNN’s Jake Tapper told Fauci.

“More than 3 million Americans had been fully vaccinated, more than 18 million had at least one shot by inauguration day. I think President Biden, then president-elect Biden had two shots by then. You’re the president’s chief medical adviser. Why is the White House politicizing the pandemic by tweeting out that there was no vaccine available until Joe Biden became president? ” Tapper asked.

“You know Jake, I’m sorry. I cannot explain every tweet that comes out. You are talking to the wrong person. I was not involved in the tweet. I just can’t explain it. Sorry, ”Fauci responded, but Tapper wasn’t finished.

“Yes. Of course. He got vaccinated. And others got vaccinated. From a pure accuracy, that is not a correct statement. But it just went out. I’m sorry. There’s nothing I can do about that Jake, ”Fauci continued.

The White House tweeted again less than an hour after Fauci’s interview, apologizing for the blunder.

“We previously misstated that vaccines were unavailable in January 2021. We should have said that they were not widely available.

“Vaccines became available shortly before the President came into office. Since then, he’s responsible for fully vaccinating over 200 million people, ”the tweet stated.

More than one million COVID-19 deaths were registered in the United States earlier this week, marking a milestone two years after the first instances upended and reshaped everyday life.

The one million threshold serves as a striking reminder of the pandemic’s overwhelming pain and loss, even as the virus’s threat fades from many people’s thoughts. It represents about one death for every 327 Americans or more than the whole population of San Francisco or Seattle.

By January 2021, the death toll in the United States had surpassed the sum of the country’s military deaths in World War One, and it would surpass the American military losses in World War Two.

According to the WHO, the true toll, which includes those who died directly from COVID-19 as well as those who died as a result of the outbreak, was likely closer to 15 million.

You were reading: Fauci says he can’t explain why White House politicizing COVID