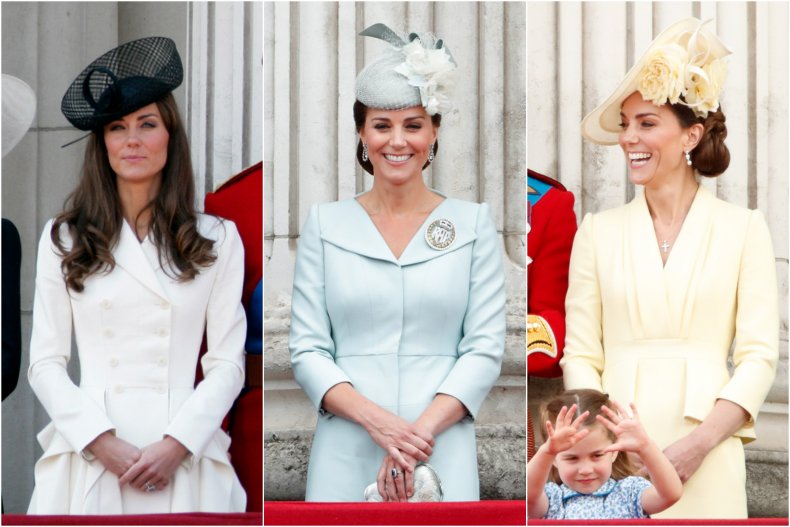 Kate Middleton has made numerous appearances on Buckingham Palace’s iconic balcony since marrying into the royal family in 2011.

Each year the annual balcony appearance after the Trooping of the Color ceremony marking Queen Elizabeth II‘s official birthday provides royal watchers with the opportunity to see the Windsors at their fashionable best.

With the announcement that the 2022 Platinum Jubilee Trooping of the Color balcony appearance will be restricted to members of the royal family who “are currently undertaking official public duties on behalf of The Queen,” Newsweek takes a look at some of Kate Middleton‘s best balcony outfits as she prepares to join the monarch on June 2.

Kate’s first and perhaps most important balcony appearance to date came following her wedding to Prince William in 2011. The new Duchess of Cambridge wore her Alexander McQueen wedding dress topped with a Cartier tiara loaned to her for the occasion by the Queen.

The new royal couple broke with tradition by giving the public two kisses on the balcony as they were joined by other members of their family including Prince Harry and the bride’s sister, Pippa Middleton.

The 2011 Trooping of the Color ceremony marked Kate’s first as a member of the royal family and her first balcony appearance since her wedding day.

For the occasion Kate wore a military-inspired double-breasted white coat dress by the designer of her wedding dress, Alexander McQueen. She paired the coat dress with a black hat by Sylvia Fletcher for Lock & Co.

2012 was a big year for the royals, with the Queen’s diamond jubilee (60 years on the throne) being celebrated months away from the London 2012 Olympics.

Following a special service of thanksgiving marking the Queen’s reign at St Paul’s Cathedral, the royal family drove back to Buckingham Palace to greet thousands of well-wishers gathered on The Mall.

This balcony appearance was notable for its “slimmed down” royal grouping. The members of the family on the balcony were restricted to the Queen, Prince CharlesWilliam, Kate and Harry.

The 2016 Trooping of the Color was a special celebration as it marked the Queen’s 90th birthday. The monarch stood out from the royal crowd on the palace balcony for the RAF flypast wearing a neon green ensemble.

Kate did not pull focus from the monarch in a competing color but instead appeared wearing a white Alexander McQueen coat dress and a pale pink hat by milliner Philip Treacy.

For her 2017 Trooping of the Color appearance, Kate opted for a vibrant pink custom Alexander McQueen dress with pleated skirt and neckline details. The color of the dress matched a printed floral dress worn by Princess Charlotte, who appeared on the balcony with her mother.

The duchess paired her dress with a textured neutral clutch bag by Etui and a refined pink hat by Jane Taylor millinery.

For the occasion Kate wore a pair of heirloom diamond drop earrings that had been loaned to her by the Queen and which she has worn on a number of official occasions.

For the 2018 Trooping of the Color, Kate wore a custom Alexander McQueen blue silk dress with puffed shoulder detail and bracelet-length sleeves.

With her outfit Kate paired a Juliette Botterill dish-style hat with floral, bow and veil additions. The duchess also wore a collection of blue topaz jewelry by one of her favorite jewelry designers, Kiki McDonough.

For a special commemoration of the Royal Air Force’s 100th anniversary, members of the royal family attended a special event in London’s Horse Guards Parade before returning to Buckingham Palace for a flypast.

Kate attended the event alongside her new sister-in-law Meghan Markle, who wore a black Christian Dior outfit. Kate opted for a pale blue coat dress by Alexander McQueen in her favorite style with a hat by Sean Barrett.

For jewelry Kate wore the queen’s diamond drop earrings and a special diamond badge loaned to her as the patron of the Royal Air Force.

For the last Trooping of the Color ceremony before the two-year break owing to the coronavirus pandemic, Kate wore a simple primrose yellow Alexander McQueen dress with pleated panels and neckline.

The duchess paired her dress with a Philip Treacy hat which she wore in 2018 to the wedding of Prince Harry and Meghan Markle and for jewelry she wore a simple crucifix necklace and a pair of diamond and pearl earrings loaned to her by the Queen.