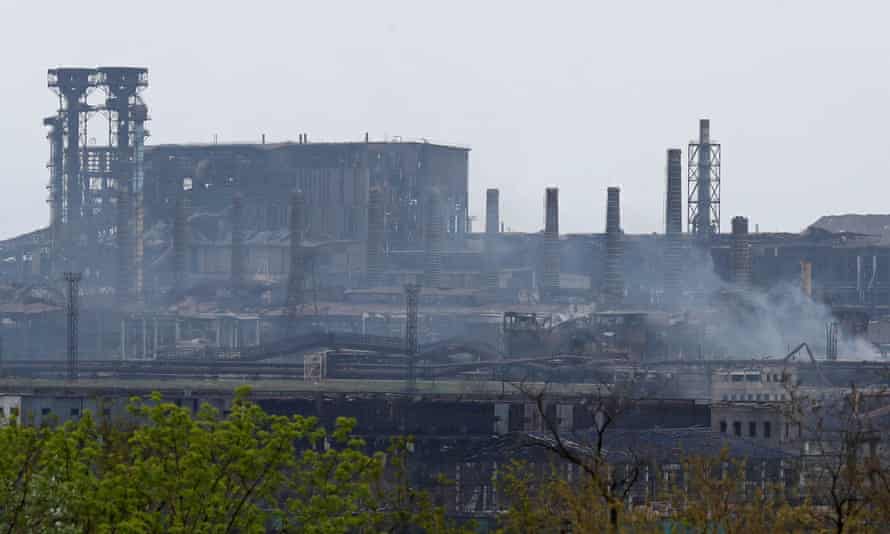 Russian forces in the Kharkiv region have not been engaging in active combat, the Ukrainian general staff has said in its latest update on the conflict.

Their main efforts were instead “focused on ensuring the withdrawal of troops from the city of Kharkiv, maintaining occupied positions and supply routes.”

In the southern port city of MariupolRussia was continuing to blockade the last remaining Ukrainian forces in the Azovstal steel plant, it said, and was using “mass artillery and air strikes”.

“Very difficult negotiations” are underway on the next stage of evacuations from Mariupol and the Azovstal steel plant, where the city’s last remaining Ukrainian defenders are holed up, Ukrainian president Volodymyr Zelenskiy has said in his latest nightly address.

We do not stop trying to save all our people from Mariupol and Azovstal. Currently, very difficult negotiations are underway on the next stage of the evacuation mission – the rescue of the seriously wounded, medics.

It is a large number of people. Of course, we are doing everything to evacuate everyone else, each of our defenders. Everyone in the world who can be the most influential mediator has already been involved in the relevant negotiations.

Russian forces have intensified their bombardment of steelworks, where many of the fighters are thought to be injured. Recent evacuees have described hellish conditions in the network of underground bunkers there.

Zelenskiy also warned that the war and Russia’s blockade of Ukraine’s ports were “provoking a large-scale food crisis”.

Russian officials are also openly threatening the world that there will be famine in dozens of countries. And what could be the consequences of such a famine? What political instability and migration flows will this lead to? How much will you have to spend then to overcome the consequences?

These are the questions that need to be answered by those who are delaying sanctions on Russia or trying to postpone aid to Ukraine.

His warning came as G7 foreign and agriculture ministers were meeting in Germany to discuss ways of breaking the Russian blockade of grain exports.

Zelenskiy also claimed that Russia had lost almost 27,000 soldiers, “many of them young conscripts”, and that Ukraine had downed a 200th Russian military aircraft.

Russia had also “lost more than three thousand tanks, armored combat vehicles, a large number of conventional military vehicles, helicopters, drones and all its prospects as a state.”

And why all this? For a monument to Lenin to stand in the temporarily occupied Henichesk for a little longer? There is no other result for Russia and there will not be any.

The Guardian is not able to verify Ukraine’s claims regarding Russian losses and Moscow has provided very little detail.

Ukraine has “likely won the battle of Kharkiv”the country’s second largest city, the Institute for the Study of War has said in its latest assessment of the conflict.

Ukrainian forces prevented Russian troops from encircling, let alone seizing Kharkiv, and then expelled them from around the city, as they did to Russian forces attempting to seize Kyiv.

Russian units had “generally not attempted to hold ground against counterattacking Ukrainian forces over the past several days, with a few exceptions.”

Reports from Western officials and a video from an officer of the Donetsk People’s Republic (DNR) indicate that Moscow is focused on conducting an orderly withdrawal and prioritizing getting Russians back home before allowing proxy forces to enter Russia rather than trying to hold its positions near the city.

The US-based think tank said Ukraine would now likely “attempt to disrupt ground lines of communication (GLOCs) between Belgorod [in Russia] and Russian forces concentrated around [the Russian-occupied city of] Izyum, although Russia is using several GLOCs, including some further away from current Ukrainian positions than any Ukrainian counteroffensive is likely to reach soon. ”

Russian troops had “made no progress” with an attempted ground offensive from Izyum, it continued, adding: “We had previously hypothesized that Russia might give up on attempts to advance from Izyum, but the Russians have either not made such a decision or have not fully committed to it yet. ”

Meanwhile, it said, the main Russian effort was aimed at encircling the cities of Severodonetsk and Lysychansk in Luhansk.

Russian troops attacking from Popasna to the north made no significant progress in the last 24 hours. Russian forces coming north-to-south have failed to cross the Siverskyi Donets River and taken devastating losses in their attempts.

The Russians may not have enough additional fresh combat power to offset those losses and continue the offensive on a large enough scale to complete the encirclement, although they will likely continue to try to do so.

As the time approaches 8am in Kyiv, here’s a round up of the latest developments.

This is Helen Livingstone bringing you all the latest news on the war in Ukraine.